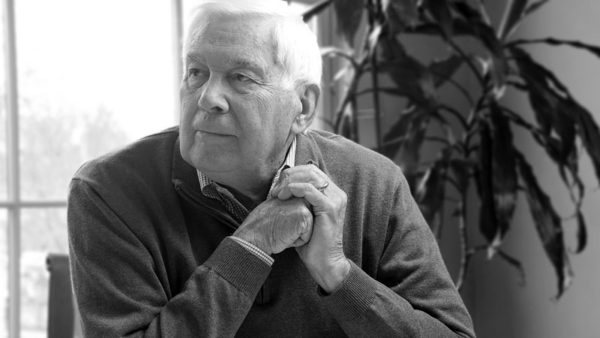 At least he seemed to have become fearless to those who knew him throughout his adult life. In point of fact, there was little in the unpromising circumstances of his youth that might have been expected to conjure bravery. Jim was like that, always pushing boundaries, always looking for the win, always doing what could not be done. Most of the time his intrepid journey produced astonishing results.

When Jim passed on December 27, 2022 after battling cancer, he left a loving family that was his pride and joy. One of nine children preceded him in death. Carolyn, always at his side, survives him. Jim was the rare husband who always spoke respectfully and tenderly of his wife in her absence. Always.

With two of his brothers, Jim founded and served as the CEO of MetoKote Corporation, which became the largest provider of coated metals to the automotive industry. Success in business seldom came easily, but it arrived serially thanks to Jim’s combination of inventiveness, creativity, and dogged persistence. In this, too, he was fearless. It was always a matter of pleasure when Jim would pull out a sketch of a machine he had designed in pencil and enthusiastically describe its merits. He felt things could change if people would fear change a bit less.

Along the way, Jim jousted with heaven. After a long personal search into the ultimate purpose of his life, he embraced a version of Christianity that was somehow simple, adventurous, and humble all at the same time. Simple, because it was built on the rock of faith that the universe has a Creator God and our freely chosen rebellion against God means we need Jesus to reconcile us to God. Adventurous, because he loved how the discoveries of science taught us new things about the universe and new ways of thinking about its Creator. Humble, because he always insisted his own personal beliefs “COULD BE WRONG.” In the end, he said, God’s purposes are a mystery and all we can do is have faith.

To those who observed Jim from a distance as well as to those who were caught up with him in some common cause, Jim was known for his philanthropic generosity. Several effective not-for-profits would not exist or would have failed along the way were it not for Jim’s ideas and the financial resources he and Carolyn were able to bring to bear. A partial listing must include Overseas Council, SAT-7, the Theological Book Network, the Colossian Forum and The Issachar Fund. There are many more. It seemed to Jim they had important work to do. Fearlessly, he made it possible for them to do it.

The latter decades of Jim’s life brought an impassioned concentration on the touch points of faith and science. He was able to engage even the most arcane conversations without losing his concern that pastors and his grandchildren live responsibly and wisely in a world where these issues and the supposed boundaries between them impinge upon everyone’s journey. He moved fearlessly through this terrain, too.

With Jim’s passing, there is a little less humility and a little less fearlessness in the world he now leaves to us. He would want us to do something about that.

The humble pursuit of the truth about God and creation.

Issachar Fund partners with scholars, leaders and organizations that seek religious and scientific truth, learning from and contributing to the ideals, values, knowledge and practices of our increasingly multicultural society.

The goal of the Issachar Fund is to encourage encounters between a broad range of perspectives as we explore the big questions of existence, purpose, and meaning.

The Issachar Fund encourages all spiritual traditions—Christianity especially—to become aware of the challenges of our time that arise from scientific and technological development, and to engage in internal and external dialogs about how best to understand and meet these challenges.

The Issachar Fund identifies and supports those who have the preparation, vision, and motivation to discern wise courses of action.

The Issachar Fund disseminates compelling learning and wisdom distilled from science and religion in order to inform and encourage leaders in every sphere of human activity.

At Issachar Fund, our programming is focused on how religion and science can inform each other, and on how religion can help us understand the implications of technology for human personhood. Diverse religious and ethical perspectives enrich our understanding, and support for both scholarship and dissemination of its findings enlarge our contribution to the common good.

Issachar Fund is legally organized as a private operating foundation. This means that most of our projects are initiated by our staff, in conversation with our partner organizations. However, we also do some traditional grant-making for strategic projects consistent with our mission and priorities. The process for applicants begins with a Letter of Inquiry.

Issachar Fund’s mission has evolved over time, yet our DNA remains constant. We encourage collaboration, innovation and learning across the boundaries of discipline, nationality, and religion.  Our programs and projects prioritize the sharing of relevant information and the building of networks that benefit each other and the communities in which we live.